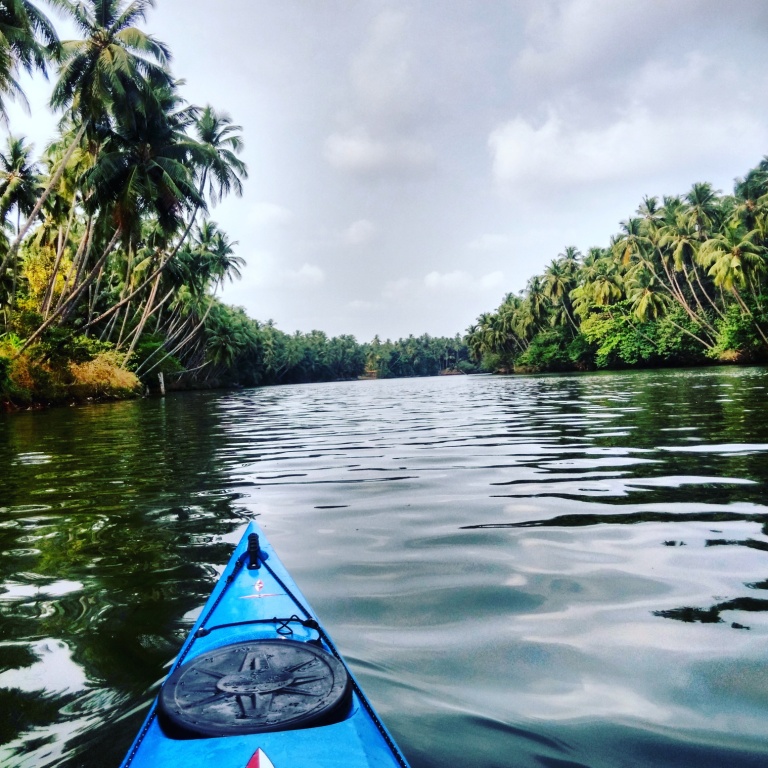 It is 9p.m. and I’m in a run-down corridor. In a crisp white adidas jacket and shorts, I’m literally rubbing shoulders with a rather rough crowd. Frayed shirts, if any, and a lungi or dust coated trousers. A jumble of sweaty limbs and hard worked faces. There is one light along this 10 metre alley way that you wouldn’t notice if not for the queue that emanates from it.

As the feet shuffle along slowly, pressed between a second line on my left and the derelict wall on my right, the person in front of me takes out a phone. He’s dialling ‘bibi’. I discern – ‘Rum. Quarter’. He puts the phone back in his pocket. He’s smiling.

I am standing in a line at an alcohol shop in Kerala. The few that are.

Kerala is a drinking state. Always has been. Earlier today I walked past a small green walled hut that flashed the word Toddy over it’s front. Inside you wouldn’t have to look deep to find handfuls of people sitting at a table with a bottle of the unmistakable white liquid in bottles. People winding down after a long day.

The same is true in the line I’m in. Despite the dark and the squalor, cobwebs hanging over us, the mood is happy. Everyone is slowly but surely inching towards a good night. Down at the end of it, a thick grill divides me from the cashier. I ask for 3 Kingfisher Premium. He hollers over his shoulder. And holds up 1 finger. I ask him what else he has. Zingaro. Strong. 2 I gesticulate. He nods. And types it into a machine. A dot-matrix printer starts buzzing and he puts his hand forward. I give him a 500 that’s ready. As I wonder how much more I’ll need, he says 280. He’s joking.

In a cruel twist of fate, Kerala has the cheapest legal alcohol, and very few shops to sell it. It has been cracking down on the liquor shops systematically, and apart from 5 star hotels and KSTDC(Kerala State Tourism…) restaurants, you can’t hope to sit and drink into the night. Some say, it has some correlation with Kerala’s steadily rising illegal liquor market, but you didn’t hear it on this blog.

I head to the pickup spot, bill in hand. He offers me my three well-earned bottles. I don’t bother asking for a plastic bag, having not seen them on anyone who’s emerged from this corridor yet. And I snake my way past two lines. Outside Najeeb meets me to tell me he found a place we could have avoided this. I say, why would I have?

The next time you’re in Kerala, keep an eye out for them. By afternoon or early evening. A line of patiently waiting labourer-looking-hard-worked people with a twinkle in their eye. No jostling, no breaking formation. Just the patience of someone who knows better. And attached to the mouth of this happy line is a run-down establishment selling cheap legal liquor.

The other thing that might hit you, is the Bakeries. Lined all along the roads, you can’t miss them. Koolbar and Bakery. Offering fresh juice and warm cake. Macaroons and Halwa. Biscuits and pastries in all colours and shapes. ‘Farsan’ in big glass containers. Egg patties with half a boiled egg in them. And if you missed it, you won’t have to hold your breath too long, because another one will be with you 4 shops away.

Najeeb fills me in on this curious occurrence too. Kerala-ites love bakery food. You can’t visit someone’s house without it. In Ramanattukara, the small town I’m in, alone there are roughly a 100 bakeries. One in every 4 shops. With a population of 30,000 that’s 300 people to one bakery. And do they make any money? Najeeb puts it at 1 Lakh a day. Investment? 30 INR per sq. feet rent a month.

And he starts pointing them out to me. Slowing the two-wheeler as we pass them. He tells me that even in the remote villages, there are 4-5 bakeries. I ask him – ‘How many medical shops?’ He answers 1-2. But easy to imagine this being an inflated number. Maybe in Kerala cake saves lives.

As we stop at a petrol pump to fill up Najeeb opens the hood to reveal our catch. The attendant doesn’t flinch, or smile. He understands. And asks Najeeb – ‘How much?’ Here, in this quiet town in Kerala, with a literacy rate of 83%, it is easy to see, that everyone either bakes or gulps it down by the bucket.