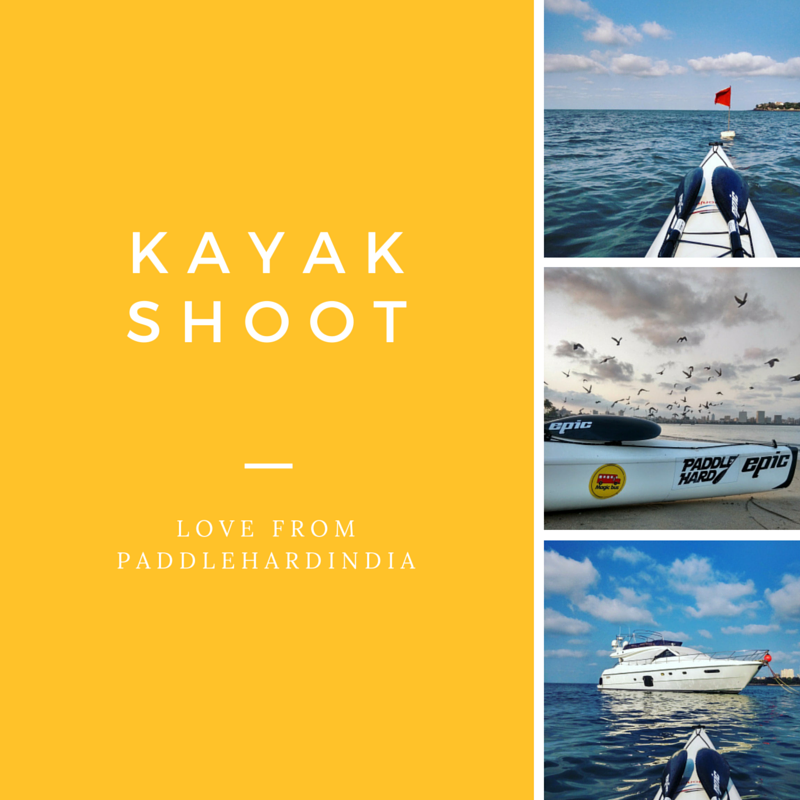 It’s 3:45 in the morning. And my alarm is wrecking all kinds of havoc. I’ve slept 2 hours and it’s time to go to work.

The good people at Frodo Cam are launching their camera campaign this monday and they’ve asked me if I’d like to be a part of their campaign. Tarun is an old friend of mine, and built my pre-expedition video, so as I drag myself out of bed, I’m gearing up to a day of paddling hard.

At 4:15, Tarun is home, and we head down to strap the kayak atop the car. It’s tedious work and you don’t want drowsiness to get in the middle of securing the kayak. When that happened the one time, I was driving with a 19 foot long kayak hanging sideways over the car with trucks missing it by whiskers.

Thanks to a really tight schedule, I’ve not topped the car off with petrol, so at 4:30 in the morning I’m driving into a petrol pump to sleepy, confused stares at a white kayak atop a car with two rough-ish people in it. We pick up another frodo-ian who will be coordinating the shoot today.

Enroute, it’s talk about kayaking and exploration. Our experiences and building campaigns online.Bombay is awake at the oddest hours and there is a stream of steadily moving traffic even at this hour. Finally at 5:30, the car(&kayak) is safe at Marine Drive. I plan on launching from Chowpatty beach, but decide to swing by H2O and check if old Pandey ji would let us through for a quick video. I’m stunned to know that let alone Pandey ji, H2O doesn’t stand there anymore.

We bring the kayak down and start setting up. I’m ready moments later with my skirt, paddles, water and gopro. Tarun is against having a competitor product in the frame, so bye for now go pro. As the team lines up, I’m left to take in the beauty of bombay in the morning. It’s 6 o’clock and the evening lights that adorn queen’s necklace are still on. You can hear the hum of the city waking up as the trains run past marine lines. The darkness turns to blue to shades of light orange in the sky. People walk past us in the busy-ness of Marine drive. Joggers, cyclists, morning walkers. The people who clean our streets are already at work. And I will be too.

Frodo’s founders join us, and we chat about our work. We share a college, so there are many questions about how either of us are doing what we are doing. The director of the shoot takes over, and at around 6:30, we start lining up our first shot. It’s the take-control shot, where I pick up the kayak by the bow and drag it down to the water. Frodo is this lovely camera mounted onto a wrist strap like a watch and it’s in a uniquely yellow form. The take is easy, but many a slip between the cup and the lip, so we rehearse.

After 8 the water will turn into a mirror for the sun. I express this to the team, and I’m on the water. For a simple pass by the camera. We do about 10 takes of this before the team is happy with the outcome. I’ve been keen on taking this particular shot of a back profile kayaking, and after a little playing around with a selfie stick, we have Frodo planted where we want it.

And finally, it’s time to head out. I jump into the kayak. Legs in, skirt cemented and paddle away. The first stop is the police vessel. Pradip, my kayak instructor and guide, tells me we can spot dolphins just off the police vessel. As I approach, the night shift is just finishing and I watch about 7 officers jump aboard a small dingy clearly not made for as many. With no life jackets, the eternal optimism of bombay makes me smile. No dolphins, so I decide to capture the second most beautiful vessel out here today, Godrej’s yacht parked out 1.5 kms from shore.

I approach and with the shifting wind, the boat shifts to greet me. As I drift alongside, the crew on board views me. I wish him a good morning. My lack of sleep means I’m probably not my most chatty self. But as I sit there, he asks me if I need water, clearly worried about the sun taking a toll on me. I’m touched, but I have my own supplies. I ask him about the dolphins and he points me in one direction. I take off, and it’s a great decision.

I’m rewarded by waves and wind. The kayak is drifting along nicely now and there’s more urgency in paddling. Nothing trumps a shot of adrenaline. And I’m having a good time. In the middle of all this, I spot a lone red flag, propped up on thermacol. Probably the work of some fisherman, but bobbing up and down, it’s a sight.

I spend some time at it, and then turn around. The waves are behind me, and I can feel the morning air strong on my face. It’s a good run. But it’s made better, by the solitary fin that rises gracefully out of the water. And then just as gracefully completes the arch and slides back in. Dolphin spotted. I point and stare. Then I try and follow it’s intended path. But nothing. The water has gone back to it’s natural state and this dolphin doesn’t want to be seen. Not today. I don’t take it personally, and kayak back to shore. I’ve been gone almost an hour, and one of the founders remarks that I’d gone pretty far. Sometimes you just have to.

Back at shore, there are a couple of shots that need to be redone, and one closeup of me using the camera. And then, the fun bit. We load up the kayak on the car, and barely have I finished when the fun part of my outings begins. Talking to cops. The one at marine drive flat out refuses to let me go, citing public nuisance. Eventually, after a fair bit of talking, he lets me through.

At JVLR I meet two more of them. I dish out to one and refuse the other. A small price to pay for a glorious day.