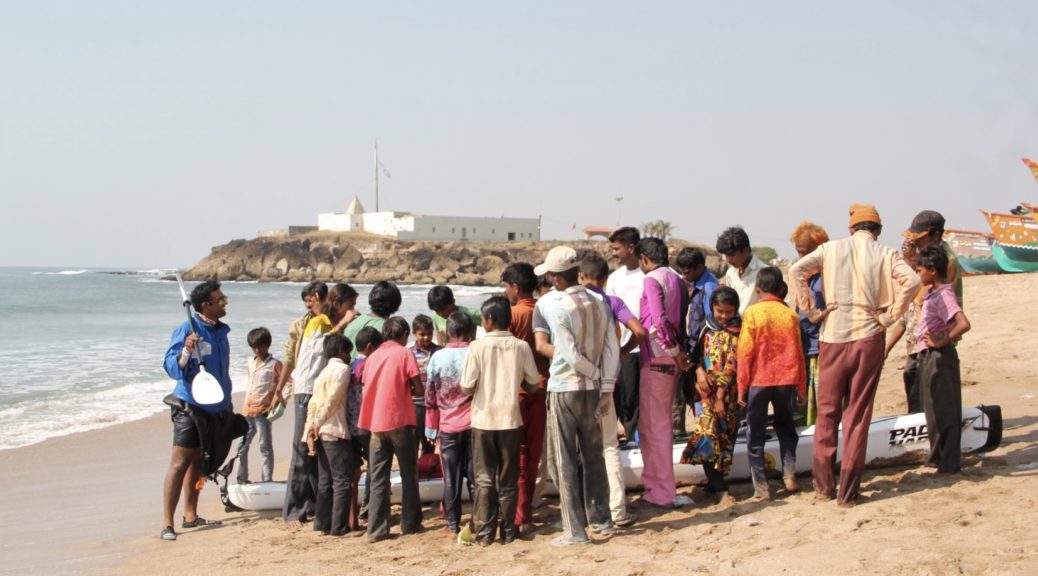 If there’s one thing we can all be happy about, it is that our borders are secure! The seed of the affirmation of our safety was sown in Okha when the GMB(Gujarat Maritime Board) head there, a superbly nice gentleman by the name of Captain Rakesh Mishra, told me that whatever I did in Gujarat waters would be tracked. Now that sounds fantastical, but he also told me how it was implemented.

Shortly after the Taj attacks, the then Modi state government took the reins to set up towers along the state. Towers that give the defence forces an unrestricted view on what craft is out on the water. I’ve even been told that they can track the size of the vessel in question. I wanted to probe the issue but decided that the less I know the better.

When I met the Commanding Officer of the Indian Coast Guard, Commandant Harish More, he echoed a similar sentiment. Saying, don’t worry, we will know where you are. There has been no greater sense of safety than that. And right until today, I’m secure in the fact that they have my back. For all the detractors and the doubts that ‘This is fine abroad where they have better facilities and safety measures’ this was a big blow.

Now all the technology in the world means nothing if you can’t mobilize and take effective action, which is what brings us to Sagar Kavach. Kavach meaning Shield, Sagar being the sea. And for the last 4 days we have been, unknowingly, playing devil’s advocate to our line of defence. It started when Shanjali and Nitin were spotted in Navi Bandar awaiting my landing. With a pair of binoculars and the camera at ready, they caught the attention of locals way before my lovely boat hit the shore.

What is equally heart warming is that the police didn’t look to harasss us, or intimidate us but chose ‘innocent until proven guilty’. Thanks to three days spent running around in Okha, we had the necessary paperwork handy & laminated(from dad’s years of laminating everything from certificates, to my sketches. He would laminate the pages on my passport if he could.). So landing at Navi Bandar was effortless. The policeman obviously told me that this area was restricted and that photography was not allowed. I told him we were happy to delete anything if they deemed necessary. Having had a look at the paperwork, he said everything was in order and sent us on our way.

At Mangrol, the sight of a strange white, hand powered boat caught the local eye and within minutes of my well-executed-landing-amidst-big-waves, there were atleast 60 people at our heels. I thanked the first police responders for their first response, and while we tied our kayak, the sub inspector of police arrived in a jeep. Whether it was the afternoon heat bearing down on us or the general mob that looked ready to strike down demonetization something seemed to have placed something foul-smelling under his nose. He started conversing with First Responders in Gujarati, some of which I caught on to, so when he said – Kanyakumari to Dwaka I corrected him about the route being the other way around.

He wasted no time in telling me that I was free to kayak from Dwarka to Kanyakumari, but didn’t understand why I needed to step foot on his soil. I tried to explain that I can’t kayak directly to Kanyakumari and need to halt as I go, but this wasn’t a theory he bought into. Infact he looked like he’d left his wallet and cards and those worthless 500/1000 notes at home because he didn’t think anything was worth buying into. Very soon we were all headed to the Fisheries department where we were marched up to the head, a very genial man, who shook our hands and said – ‘Oh, aapke bare mein aaj ke paper mein hi aaya hain. Please baithiye.’ (I read about you in today’s paper! Please sit down)

Things went smooth after that, and despite said Sub IP butting in about the inaccuracies of my route, a matter that I should have a thorough intellectual debate which I’m happy to lose, the fisheries head suggested I continue paddling my boat and let everyone else fly a kite. We all parted ways with smiles on our faces, and I thanked the Sub inspector for being thorough. If it was indeed a suspicious craft, his drilling would have, I believe, resulted in results. And that’s what’s most important. I think my case had a point, because he showed up the next morning to cast me off, and wished me the best of luck.

Sagar Kavach is a inter departmental exercise that is being run between the coastal agencies to check the smooth functioning of our coastal safety and I have to say it’s going very well. Landing in Veraval, just off of Somnath, the police met us a third time on the beach. Now, while this might look tiring, I think it’s a good thing. Since I am not a suspicious element (Last I checked this was confirmed by multiple third parties) I have nothing to worry about. A realization brought to me very starkly when an SP of police strolled in while I fastened my kayak and announced out loud – ‘Welcome to Somnath!’

He proceeded to shake the hand of a local resident, who not knowing any better, took the handshake as an overdue gesture and shook it quite firmly. I stepped in to gently correct his mistake and thanked him for saying so. It was a warm, albeit funny way to be welcomed.

Thoughts of the Queen of England, on the day of a royal knighting, touching the shoulders of someone checking the carpeting came to mind. But a welcome is a welcome, and a knight is a knight.

So here we stand in Somnath, a little amused, but fairly proud of our defence.