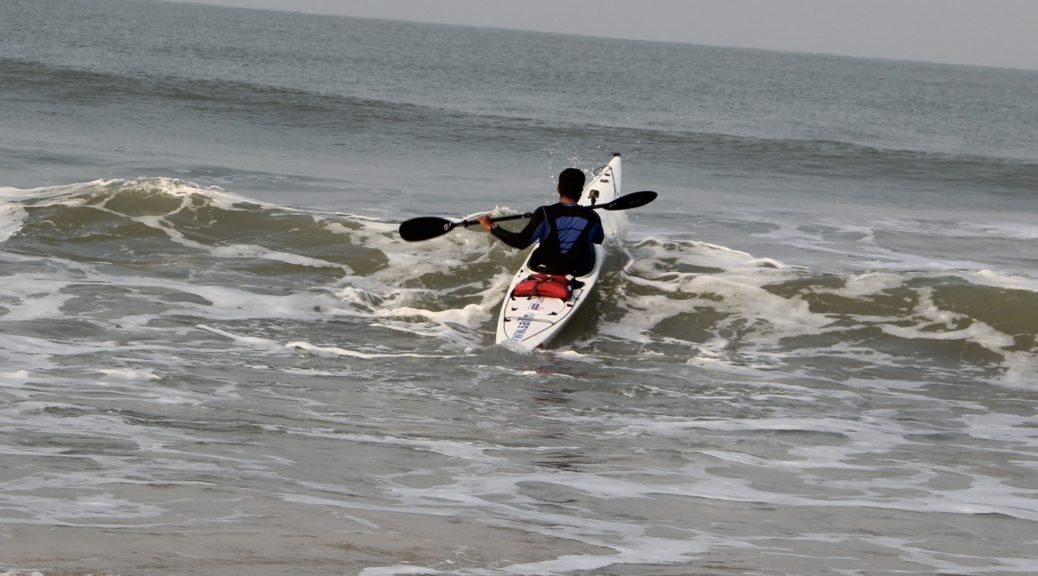 Eddy. Back in the day, he was that Tekken character who with his Brazilian martial arts and colourful pants was never going to amount to much, and your best friend would chose him for his roundabout kicks. Dial it forward to today, and Eddy means a circular flow of water often caused by an obstruction such as rocks in the middle of the sea.

Now why would anyone put a rock in the middle of the sea. This is ridiculous and absurd and in Kayaking terms it’s called – that-spot-with-the-breaking-waves. What it does, in case you’re caught in one like I was yesterday is turn a fearsome 19 foot long white fibre kayak that’s on top speed into a rubber duck in a turbulent washing machine.

I’m kayaking from Dwarka to Kanyakumari and the process has seen us kayak down the beautiful blue / green west coast of Gujarat down to the tip at Diu. We are now into Day 2 on the East Coast of Gujarat, and it is a doozy. With the Gulf of Khambhat acting as a real contender for spoilsport of the year, the water here is literally sucked into that narrow stretch of land locked sea. Imagine a sponge, if you will, that’s thrown into a quiet unsuspecting lake, but just by the edge so a fraction of a portion of it’s tip hits the water. Now imagine the sponge is twice the size of the lake and it’s not a sponge but a vacuum cleaner for water, and as the water starts funneling towards said sponge / vacuum, you will start to get an idea about my affinity for sponges and it’s irrelevance to this story in general. Also, you might tangentially arrive at how the Gulf of Khambhat is pulling me towards it.

So, here we stand. In some pretty murky water. I mean, dark brown, can’t see my paddle in the water, murky. And there are some rocks underneath. And the wind is blowing against me. Oh, sorry, forgot about the wind. It’s what they say, the lesser of two evils. But at 4-7 Knots it’s building up some nice head on waves. And the bow of my kayak is like the sensex on receiving the demonetization news, it doesn’t know whether to climb or come crashing down. Only there are rocks. And I’m still being pushed into the Gulf.

So no Edddy. I saw to you, not today.