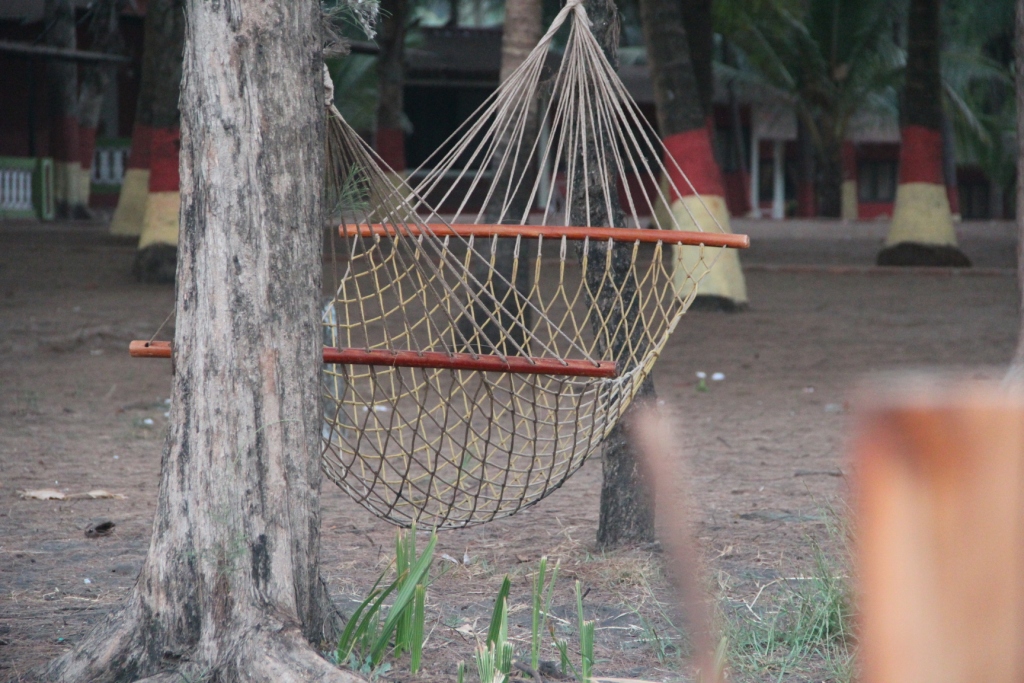 Day 7. Murud to Anjanwel
Murud, ahead of Harnai has to be one of the nicest beaches we’ve seen so far. Stretching for kilometers of white sand, and the gurgliest green water, it was ideal to sit back on a hammock and let the wind sweep down from up north. So tempting was the idea that I decided to abandon a morning departure for a more suited evening one, when the wind kicked up and I had it behind me.

The place we were staying at was right on the beach and the hammocks hung low on palm trees. Perfect. We’d arrived the night before and enjoyed the solitude of the place. Murud charges you Rs. 20 for car entry, which is a brilliant practice I think. I’m guessing it goes to the cleanliness of the place. The spot we had landed on 5 kms back was in stark contrast. But Harnai was a brilliant place to find fish. And we found that Santosh is from a village here. His friends on a fishing trawler had spotted him coming in with a white ‘hodi’. And he welcomed the switch to the evening as it meant a longer day at Harnai for him. It also meant freshly caught fish for us.

I used the morning to get some rest. Felt good to sleep in a little, though by 8:30 I couldn’t sleep any more. Since today was the first real rest day, minus the avil-sleep-enduced-haze that was day 5, we decided to get the Kayak ready. Shanj was particularly amused when I took a red bucket and red mug out to clean my Kayak. You must understand that my Kayak likes looking sharp. So a good splash and scrub later, she was gleaming in the sun. As we let her soak some sun, I fielded questions from the other guests staying there, and then the owner of the resort. I told him how he should have some kayaks here as he has a pristine beach and brilliant wind to kayak on. He told me he or the manager would come down for the launch in the afternoon.

I went back to my kayak and Shanj and I plastered all logos that hadn’t gotten covered yet onto the kayak. Once we were done, she looked a beauty. Mom and dad arrived, having refilled the petrol tanks for the safety boat. And Santosh had made good on his promise of fish. It was time to get going. After a lovely meal of prawns koliwada and prawn curry and rice, we got my hydration drink and gopro’s ready. It was time to hit the water.

Our driver was unusually awake, having had a nice night’s sleep on a bed outside in the open at his own insistence. He helped take my kayak to the edge of the water and I started my stretching. The manager showed up with two more friends and a small send off party assembled. A car drove at great speed past me and ran a half-circle around me and my kayak. Everytime this has played out in my head, there were Fast-n-Furious groupies in blue blouses and tinted glasses in the front seat. So I was a little disappointed to see four, obviously afternoon-drunk, gujurati boys with 4 day stubbles.

As the manager took to telling them off for it, and assuring them a good thrashing, I took my kayak into the water. I’d just got onto the water and barely dropped my rudder when Boom. A meter high wave hit me square in the face. I was soaked. As I looked up to laugh into the go-pro, I saw it lying face down. That was a strong wave. I straightened it with my paddle and headed out.

That sweet afternoon breeze was kicking in and I could feel it. It evaporated the heat and I felt strong. I paddled past my safety boat that was looking a little undone by the waves as it approached the beach for my mom and Shanj to get on board. I kept paddling and the waves kept getting stronger. I was having a good time. The green water swayed and snapped and lashed out, as I stroked on. It would lift me up and set me surfing, bow in the air. A real surf. I didn’t feel the heat, or the wetness. Just the wind behind me and the sight of the approaching cliff. By the time the safety boat caught up (in true safety boat style, there was more going on there, than on the kayak) I’d completed my first hour. I’d clocked in 9 kms. A great start. And I didn’t want to look back. But the swell was strong, and on three occassions I came close to being in the drink. I put my earphones away and concentrated. When the first go-pro ran out of juice, I caught up with the boat and we attempted a change. It was terrible, as the boat drifted with every swell and I was furious when the Vishal rammed my kayak with the bow of the boat. I paddled past and headed out.

The second hour was not the most pleasant as Mom looked a little rattled on the boat. I decided she doesn’t enter the boat again, a decision that she would crib about later in the day. It was a little unnerving and I kept the safety boat in sight. I was still doing good time and clocked another 7.5 kms in the next hour. By the time we reached what appeared to be Dabhol, I was doing pretty fine. I considered crossing over to Guhagar on the other side of the rock, but chose against it. A decision that proved to be good, as there’s a massive Jetty on the other side of the rock and I’d have had to do a excess 2 kms with the fading light.

Coming into Anjanwel, we had a rough time, with the swells getting really strong again. I waited a moment to bail some water out. (The first day I really needed a spray skirt and missed it.) And then I dove in. As the safety boat had headed in first to find a jetty, I was puzzled to see it doing cirles. There was a sandbar. And a flock of seagulls for 300 metres standing in the middle of the water. As Santosh turned the boat around to find a mouth to enter the creek, I made straight for the sandbar. My Skin was lose and I was chafing, so I hit the bar, and took it right off. Then draining the rest of the water out the kayak, I carried my kayak right across the sandbar. It was fun. To be a km out from land and walking. This must be what Jesus felt like. I put the kayak back in the water, just as the boat rounded the sandbar and brought the boat around. I paddled the remaining km through the fishing boats and saw the crowd of people assembled on the road looking at my white ‘hodi’. In the distance, over the hill, I could see the 6 twenty-storey-high chimneys of a Gas Power station and here on the low-tided beach 20 women fishing in the mud.

*Paul = Soumik Paul, captain of the IITD and hostel football team, who’s wedding I missed. The stretch I promised to dedicate to you Paulie. Wish you the best in your wedded life.