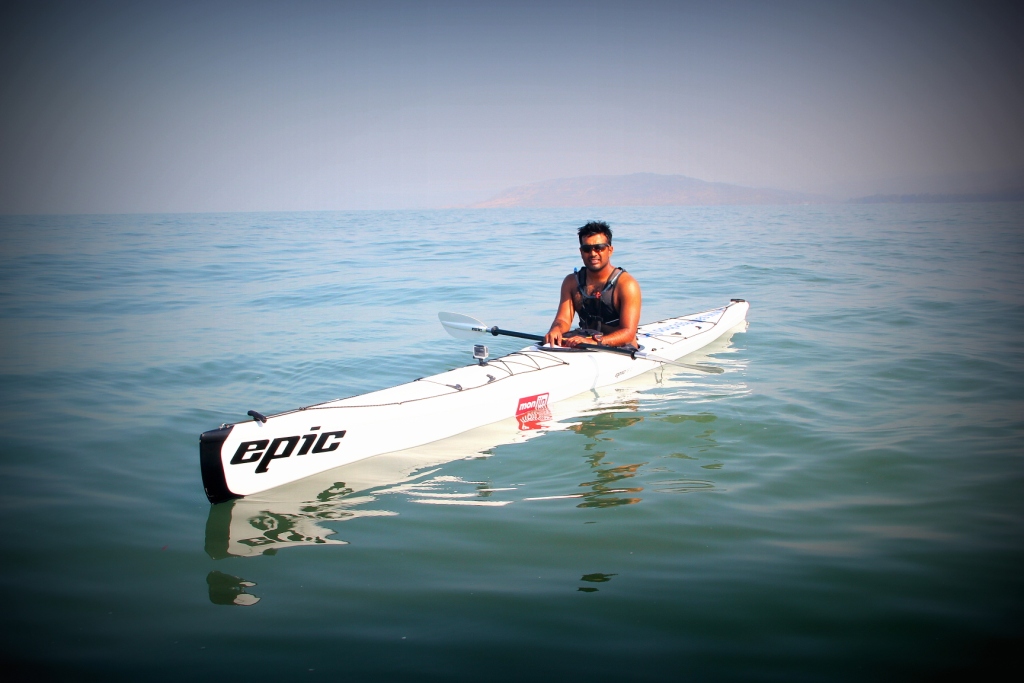 Day 5 turned into a rest day. 4 days of kayaking in the sun and roughly 22 hours of sleep led to a nicely developed cold. Travelling with two doctors meant this was as serious as Obama’s security. I popped an Avil and then there was only one natural outcome. 11 hours of sleep. I woke up to the airy little MTDC hut we were in and the surly mama bringing us a cup of tea. The rest of the day was spent fighting the drowsiness and total incapacitation that evil Avil’s bring.

So on day 6, when dad came around to wake me at 5 in the morning, I was a tad out of it still. Walking over to my parent’s I saw my customary 3 boiled eggs and a bowl of cold milk. I threw in my museli and had my breakfast in silence. I should have had that cup of tea in hindsight, because huddled into the car, I could have fallen right off to sleep if it hadn’t been for our driver’s night blindness and almost driving us off the road. We arrived at the jetty and he was prompt in helping me loosen my muscles. Shanj was worried about my sponsors logos not all being up. It’s been a rough few days and this was one of the few days we had the kayak with us and not on the safety boat. As we cleaned and plastered the remaining logos onto the kayak, our safety boat had arrived at the jetty.

We were on the Harihareshwar jetty that ferries people to Bankot. And I’d halted at Velas. A couple of kms out. We were going to ferry the Kayak back to the point of my disembarkment to be sure the flow was correct. Bundling the kayak onto the boat, we left as the first rays were behind us. A cold wind was taking us out and so was the low tide. I welcomed it at this point. And when they dropped me off at Velas, I effortlessly got in the kayak and started paddling. It wasn’t until 3 minutes in that I looked at my watch. 300 metres. Must be the strong waves at the beach. When it was 12 minutes in and I was just 1.2 kms out, I started to feel something was off. My body was fine. I had no sores, aches, cramps or fatigue in any of the muscles. Yet, I was abysmmally slow. I tried to pick up the pace. For the first 4 kms, I got nothing. There was no wind, no tide helping me, and I had taken 40 minutes. Something was way off. I rounded Velas and made my way past the Kelshi creek. This is where the morning air hit me. Coming in from Port, I had a strong wind blowing me out. Worse still was the fact that the left side of my face was freezing.
I was drenched already and the wind was biting. An hour in I had done just 6 kms and for the first time in the trip, I voluntarily pulled the life jacket out of the back. It helped keep me warm some, and by the time the rescure boat caught up, I had to tell them I was suffering. Mom was worried, but I was convinced it was just the remnants of the cold. I threw my wet cap into the boat and continued with just my glares. When a very unnerved rescue boat went out of sight, I peed, drank the last of my energy drink and took off my skin altogether. I snapped my hydration pack back on and swung my life jacket around me. The wind was still cutting but it got less traction off of my skin than the wet dri-fit I had on. The sun was coming out and it provided some warmth too.

By the end of the second hour I was clearly struggling. I had just cleared 10.5 kms which meant it was my slowest hour of paddling to date. Things were looking a little off. I had to come in for my customary go-pro change and it allowed me to get some energy drink and some gulkand barfi’s(those things are awesome). We decided to break at Harnai instead of our intended Murud. There’s something about being able to see where you are headed that gives you that extra spurt. Two and a half hours in, I was shown where we were headed, and it did the trick. Despite the massive haze that was my mind, I surged on. It also helps to spot dolphins. My first sight was after Kelshi. I paddled on, sun bearing down, wind reduced and a higher speed for sure. For large stretches I paddled with my eyes closed using the sun’s glaring light and the waves as bearing. It gave me a measure of
rest while still paddling but it was mostly momentary. It was not going to be an easy day. At 3 hours, I was at 16.5 kms. Visiblly faster the last hour but still slow going. We were standing outside Murud and Santosh tells me to make between the two forts, one on the island, one on the mainland. I didn’t question it. Caught between the irritation of doing just 20 odd kms and the relief of seeing shore, I paddled on. Passing the fort, I couldn’t help but marvel at the beauty of it. Three storeys high atleast and built on an island, I wondered how many men toiled ferrying the supplies to the island and how long it would have taken to erect this wonder.

At the end of the stretch the safety boat was waiting. There was a sandbar and rocks protecting Harnai and we had to go around it. Some solace to my battered ego of doing my leanest day yet. 19, 20, 21 Kms I paddled right past it. And turned toward the beach. Only there was none. Not that I could see. There was a battery of fishing boats of all shapes and sizes. Big bright red ones and small row boats with no motors. Bright coloured flags littered their stern and the men sat on deck taking in the
sun or playing cards. There was a look of wonder amongst them as I glided in, top-nude(I’d discarded the life-jacket after it got too hot), in a white kayak and a cap and glasses. One of two even called me to them. Just today, I couldn’t be bothered. I looked all around for the beach, and found nothing. To port, I could see a stoned walled road and a familiar gold car with a carrier on top. I waved out and kayaked closer. Someone got out of the car and pointed me to the end of the road. From a distance I could hear the unmistakable voice of my dad screaming out “Kaustubh”. I changed course again. As I landed on the beach, if you were bold enough to call it one, you could see the fuel from the boats and the smell of old fish was high in the air. More immediate and troubling was the crowd that immediately swarmed upon the kayak. I got out and before I could meet dad there were people on me. I did my best to keep calm, picked up the kayak and dragged it to a point of safety.

Harnai is a fishing port that deals in Rs. 2 Cr. of fish trade a day. I could see why. That phrase – noisy as a fish market was aptly coined, and we were drowned in a barrage of questions. While this would be fine any other day. Having done 22.5 kms on a bad day with no assistance by wind or tide, I wanted to have my cool down and find a warm bath. Stepping aside for a breath of fresh air and a moment to find my peace I looked back at the sea of fishing vessels. When the crowd was pleased they had seen enough of the kayak, and my father had informed everyone what it was and what I was doing, it was time to tie the kayak atop the car, do my stretches, drink some post exercise drink and head to where we are camped for the day. A lovely beach side property at Murud.