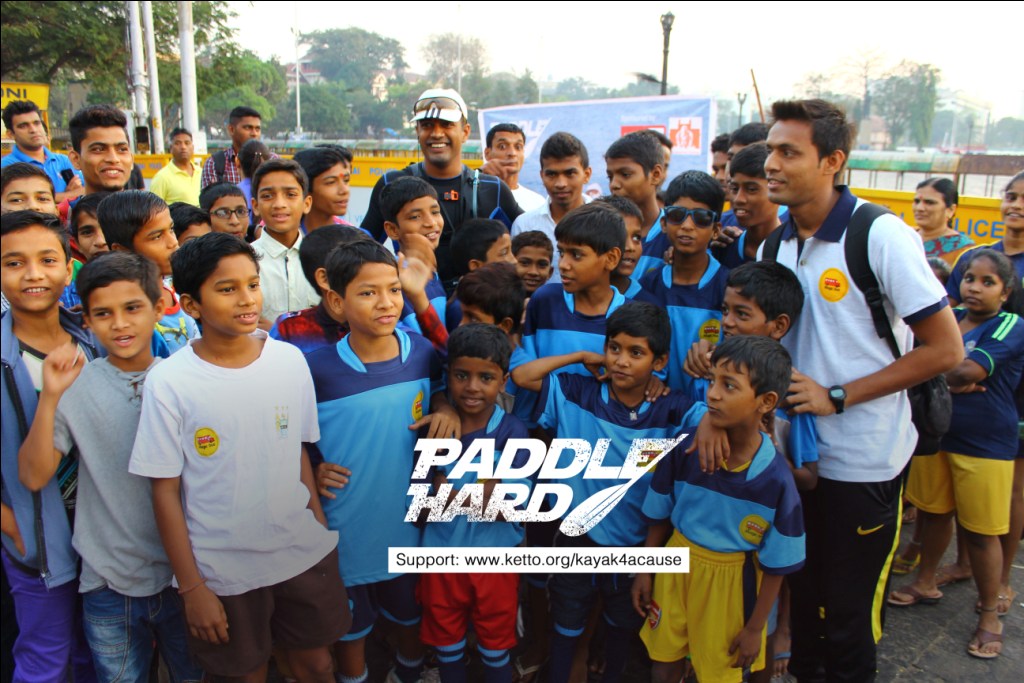 Within moments there was silence. The sweet sound of your blade leaving the water was all I could hear.I passed past the throngs of boats lined outside the Gateway. Out of nowhere I heard a voice saying – “Best of luck”. I turned to see the familiar violet colour of the Yacht club Tandel’s. I smiled at the familiar face and then I was gone.

Just as quickly as it began, I was out of line of the boats. There was emptiness. Commercial vessels scattered far and wide. I altered my course. I knew I wanted to pass through the massive oil rigs. The early morning tide was pushing me out the harbour and I let it. The wind was absent at the beginning but 3 kms in, it kicked up and came straight at me. I was going quickly and I was happy when the safety boat caught me just short of the first commercial vessel out on the water.

GC, Shanj, Melanie, my mom and the two boatsmen, Santosh and Vishal seemed to be having a good time. In typically GC fashion, I saw him lying prostrate on the bow of the boat. Go-Pro in hand catching a shoulder high shot of me zipping past. I’ll have to say that it got a little choppy when we arrived at the rigs, but the tide was still pushing me, and I carried on. I completed the first 7 kms in good time. On my last crossing, I’d covered 14.5 kms from the club house at Mandwa to Gateway and I approximated this as mid point. I was glad for my hydration pack and it made short work of stay hydrated. But the mist was insane. At 9 kms in I should have sighted Uran or atleast the high flame, but no. I checked my course. And we seemed to be on track. As affirmation the traffic to Mandwa would pass right past us. A little further came the first big change. The two people on board were woken up as it was time to part ways. GC and Melanie were to leave from Mandwa, and the boat was to take them there. This was to start a series of fun events that had nothing to do with the kayaking. As I bid them farewell, I clocked a good 4 kms before the mist cleared enough for me to realise where I was. I was well past Mandwa and almost into Sasawane. I’d saved 2 kms with the tide and my bearing. I was glad for it.

So began the home run. Having spent 2 weeks down at the BSA guest house in Mandwa, I could do the route down to Kihim with my eyes closed. Having not shut them nearly enough the night before (3.5 hours of sleep) I went with inertia and kept them open though. Despite the comforts of the familiar I had no help with the tide or the wind. When I knew I’d cleared the rocky area at the tip of Mandwa, I paused to look for my safety boat. Not finding them, I decided to move on. Around 9:30 the wind just dropped and with the sun high in the air already, it made for a gruelling hour and a half of paddling. Moving past Sasawane I got a stretch of carrying waves and surfed them for a bit. But it was not nearly fast enough and it felt like a punishment. I fought the dehydration by emptying the other 2 litre bottle into the hydration pack, but that was all my water supply. Somewhere along the stretch I must admit I had to pause for a quick pee break. I glided past Awas the way a sleep deprived, partly de-hydrated and terribly warm kayaker would glide and braced myself for the rocks that litter the south part of the beach. By my calculations I was 4 kms short of my destination. I was glad for it. When I spotted Kandheri and Underi through the mist, I quickened my pace. On the beach I could see people engage in a bunch of beach activities and I paddled clear of them. It’s good to get a moment to cool yourself down when you land, and lets not forget the surf toppling me out the kayak doesn’t make for the great first impression.

I touched Kihim and made for the shade. Something about keeping a boat steady, holding a paddle, shading the gopro and doing your business compels you to wait for shore.

When I returned I found two workers at a nearby farm house inspecting my beauty. I was quick to take pics with them and then answered their many questions about the expedition.

I was curious to know where my land and sea support were, since I was apparently first on site. I thought they wanted me to tell them the coast was clear. (In a manner of speaking, as Kihim is not the sparsest beach on saturdays) It was just then that Shanj and mom showed up with one of Avnish’s men with a bunch of bags. Dad was nowhere in sight and neither was the boat. As I changed, and plonked myself on dry ground, mom spoke to dad and he had the funniest story. Shortly after offloading everyone at Mandwa, my safety crew ran out in search of me. Somehow I eluded them; the way that a 19 foot white kayak with an orange lifejacket strapped at the back can in clear day. They were prompt in calling my father, who at this time was enjoying his Poha at my uncle’s discussing gymming and where to buy houses. It’s not a fair stretch of imagination to think my dad didn’t digest his breakfast as he tried vainly to contact me on my vodafone number. As is custom, my phone was on silent and lodged in mom’s purse. A good 16 phone calls later, my dad drove with much haste down to Kihim. This, in the company of our august Raikkonen of a driver made for a fun account. So it was sweet relief hearing that I was dry, taking in the para-gliders.

We made a beeline for Arany at Phansad where we are put up for two days. A hot shower and being out in the open here made for a good change from the beach, and the hospitality meant I would probably get good sleep tonight.