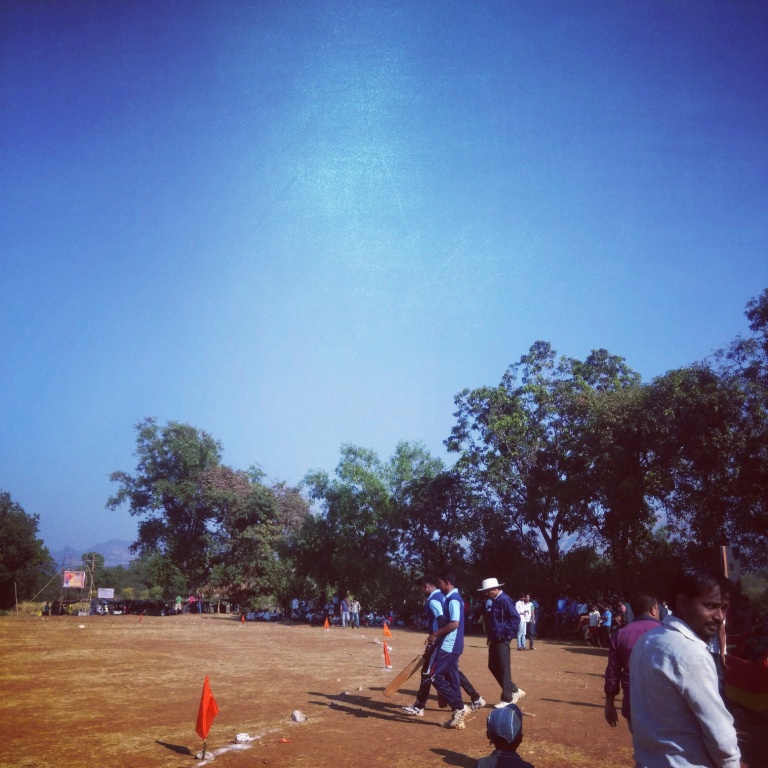 Driving down to Pali for training, one has to pass by a myriad of small farming towns. Having picked up some kerosene in a bottle, I was heading home to setup for an evening of bbq-ing. The road to Pali is a lovely drive, mostly devoid of traffic and almost always picturesque. So I was surprised when I was approaching a town, I had to slow down for what appeared to be a blockade of two wheelers. While navigating through it, I asked myself what could have caused the major holdup in this most remote of places.

I saw in the distance what could only be a semblance of a field on top of a flat, barren plateau cut off by the winter remains of a rivulet. And a beaten path that looked good for off-roading. Yet an army of bikes and a handful of cars had parked themselves at the pink and purple gates of a welcoming sign that read – Sudhagad Premier League 2015. The boards were alive with pictures of local politicians that were unmistakably orange.

Walking through the gates, you could hear the excitement ring loud through the voice of the eager commentator, who was speaking 19 to the dozen on a patchy mike. The well adorned VIP enclosure had a stand for the VIPs and acted as a player enclosure for the two teams on the field presently. The host of trophies that played centerstage to the enclosure were well protected by a bust of Shivaji Maharaj himself.

I’d walked in right on time, as the ‘Rising Stars’ were about to take to the field against the ‘Sai Fighters’. With the fielding team on the dry red dusty field, the two rising stars taking the field both touched the ground on the field line and then touched their lips in prayer for the game.

After that began the most enthralling and redeeming game of cricket I’ve seen. Everything about this spectacle screamed of the romance of cricket that amidst all the media and marketing and scandals seems to be lost. With teams like – ‘Veer Maratha’, ‘Deshmukh Traders’, ‘Sai Fighters’ & the ‘Risings Stars’ here were a bunch of people who called it as it is. The fielder on the edge of the circle scoffed at energy drinks and taunted the other team for suggesting it. They played with tennis balls and everytime someone hit a lofty six 2 or 3 barefooted kids scampered into the rocks or the bush to retrieve it and keep the game in play. The track, let alone the field was uneven and you could often see fielders jump in the air to account for unnatural bounce or sudden turning balls. The boundary itself was roughly etched out in ‘chuna’ and black round rocks from the rivulet had been painstakingly painted white to make it clear. The DJ was the rockstar of the event and interjected with Sunny Leone songs everytime there was a 6 or a wicket. The commentator was a jolly good sport, who at half time switched to hindi and explained his first half coverage in Marathi as a bet he had placed with someone that he could do the whole gig in the local tongue. *much laughter ensued*. There were no sponsors to boast of and even the plain wooden bats bore no MRF. Midway through the chasing innings, one of the bats broke on impact with the tennis ball and more bare bats were rushed to the center. No one wore padding or gloves, both batsmen and keeper and the batsman often used the red soil to dry his hands before an attempted 6. As the sun came down hard, the camaraderie was spectacular and both teams were in a jovial mood. But most of all, was the simplicity and understanding of the whole event. Batsmen would walk over to the middle to exchange the one good bat they had on the pitch, and on every wicket, you could spot the crotch guard being exchanged between incoming and outgoing batsmen. Not an element of pretense. When the final runs had been made off of a spectacular 6 with 2 balls to spare, there was pure joy and pure anguish on the field. Within minutes the presentation ceremony was done and the man of the match was given a medal. And it was on to the next match.

It really begged the question, where is real sport being played in India. There was much joy here. And every moment from the spectacular catch to the horrific miss was cheered and jeered as only a village people could. In earnest.