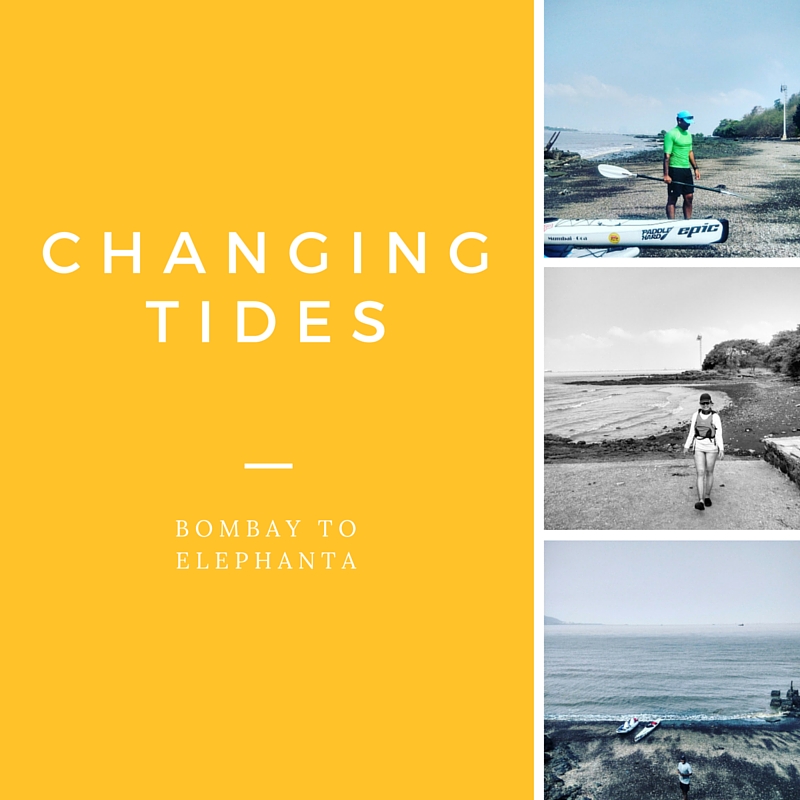 We set out to Kayak to Elephanta this weekend. It’s a distance of 12.5 kms one way. By my reckoning, a simple 4 hour run.

Here’s how it panned out ->

We started out at a 7:30 am. Low tide was an hour back, and the tide was rising. We got out, and cut between the mainland and the island opposite the Navy Area. It was a quick simple run, and apart from fishing boats in the channel and running under the jetty at Jawahar Dweep, we had no real problem.

Halting at Gharapuri(It’s called that, popularly – Elephanta island), Shanj and I walked to the nearby village. We rationed some water and some biscuits. A breakfast of cornflakes would not have sufficed for what was to come, but we didn’t know that.

Launching at 10:30 from the island, we decided to round the ship at the jetty, currently offloading it’s crude cargo, and make a beeline for Gateway. We knew there was a high tide coming, but we grossly underestimated it. In the first hour, we had covered 2 kms! Going was slow, and I wasn’t keen on leaving them out of sight, despite mine being a faster kayak. Standing still, you’d drift back towards the island in minutes. Jokingly when they caught up, Shanj said – no more chit chat till we reach the ship.

It wasn’t till I reached the first anchored boat that I could gauge how fast the tide was. You could start a sentence at the bow of the boat, and finish it at the stern. I reckoned it would change once we got to the channel. It took us 2.5 hours to get to the ship alone. By the time I reached it, the wind had picked up. The ship loomed large over me, and a barge attached to it, threw me a line. I tied it down to my kayak, but between the drift, the wind and the waves, it was more of an effort than kayaking to stay still.

Panic kicked in, because I had reached here ahead of the others. Craning my neck, I could not spot them, and I didn’t want to turn in these choppy waters. I asked the crew onboard the ship if they could spot my fellow kayakers. They could not, and I started to worry. I kayaked ahead to look past the big ship, incase they had slipped under the bridge / jetty. Highly unlikely as the high tide was almost at it’s peak.

After tossing and turning and waiting for 30 minutes, I turned around. This was increasingly difficult, and the waves were pretty choppy by now. But luckily, barely had I turned it around, and I spotted them. A million thoughts of capsizes had gone through my mind.

I paddled out to them, and told them we are staying together. We regrouped at the barge, and I gladly accpeted Manu’s snickers. It was 1 o’clock and we were still atleast 7 kms out. I was hoping things would be clear now with the tide taking us out again. I was wrong.

The channel, commercial channel, with all the big ships, barges, fishing trawlers and police boats was choppy. As the waves rushed in from all sides, my rudder started jamming. I had to rely on corrective strokes to keep her into the waves. With a kayak as big of this, and getting hit on multiple sides, it was becoming difficult to keep her steady. I had more capsize moments here than on my Goa expedition. I would later learn, that my stern storage compartment and my day hatch had filled with water. So not only was the rudder gone, my butt was heavier than my front.

I had imagined stopping for Shanj and Manu every 5 minutes, but it quickly became imperative that I constantly paddle. Thanks to an internet outage the day before, my GPS couldn’t direct me to the right spot. The sun was out, and made it difficult to be sure of there Gateway was. Luckily, I guessed wrong. I directed everyone to a spot north of Gateway. In hindsight, this let the retreating tide guide us south to Gateway, saving us a big deal of trouble.

On the choppy water, I got into a familiar situation of not being able to spot the others. Shanj would tell me later that it was slow going, and their kayak really bobbed up and down in the big swells. But they kept paddling. It was a comfort to know that she had Manu as company and I’m super proud of how they held up.

By the time, I got to the end of the channel, the current had grown super strong. I would point my kayak to the front of a big container ship, and by the time I reached it, I slipped around the back. When I finally came to the Navy area, I considered slipped in between the island again, but the tide decided against it.

I finally slowed down my paddling 750 metres out of the gateway, under a false sense of security. I was brought back to my senses when a small dinghy ferrying three foreigners, presumably back from a sailing race, started waving to me. It drew parralel, and then before we knew it, we were both stuck.

We were now parrallel to the Gateway, me paddling furiously, and he with his engine on. And we were both standing still. Next to us, an achored boat smiled on. Finally the dinghy got past the boat, and found a patch to coast in. I followed pursuit, heaving a sigh of relief when the tide finally gave in. Once I was amidst the achored boats, things got better, and for the last 300 metres, it was smooth sailing.

But the day was not over. My mind had been on the two kayakers still out there. I brought the kayak up the ramp, ran to the car and reached my phone. I wanted to alert Manu to point north and directly for shore, letting the tide do the rest of the work, but he didn’t pick up. But the call went through, and that probably meant they hadn’t capsized yet.

I decided to be ready to get them, and swung my car around to secure it. Driving past the Taj, me left lens just popped out. Dehydration? Tired of my general existence? So here I am, two friends lost at sea, driving half blind in one of the most crowded saturday haunts of the city.

By the time, I get to the jetty, it’s 4:30. Still no sign of the guys. I imagined them to be 30 minutes behind me, but it was already 45. Rakesh Madiye helped me hoist the kayak atop the car. While loading I recognized how heavy it was, and found about 10 litres of sea water trapped inside.

I secured the kayak and dialled manu’s number again. He picked up this time, and told me they were right outside the harbour. I was greatly comforted. I could not spot them, and after 10 minutes when I called he said – I think we might need some help.

At this point, that familiar feeling of worry came swarming back. I could not spot them, and it had been more than 6 hours they were paddling, with a strong tide now taking them out to sea. I discussed this with my sailing friends, who were fresh out of a sailing race.

Rakesh Varadkar was the first to respond. Barely had I explained the situation that he understood the severity. His boat was achored close, and we hitched a ride to it. I called Manu to confirm his location. Just outside the harbour was still the reply, though he tried to give me a line to take getting out of Gateway. When we finally got there, they were no where to be found. Rakesh’s presence of mind saved the day here, and he asked for the phone. He enquired what was closest to them. Manu said a single sail boat. Most of the sail boats had returned to harbour, and while I scanned them, Rakesh looked out. And he spotted them. I couldn’t spot a soul to be honest. But he was right. Way off course, almost 3 kms out of harbour, I saw them valiantly paddling. We reached them and you could see it on their faces. Manu had almost given up, and Shanjali, though cheerful, looked tired. She later told me she always knew they’d make it back, but given the drift, I wasn’t so sure.

We tied the kayak up, after letting the water out. Then, as three tired souls, we were ferried back to shore. On land, Rakesh refused our offer for a beer citing that anyone would do it. I don’t know for sure about that, but I am a 100% sure that without his help, it would have been a Long Long day. (And that’s me euphemising)

As we dug into our lunch at 6:30 in the evening, we laughed about it, but we all knew that we’d just averted a minor disaster.

Comic Relief: I spoke to mom just before the food arrived at our rooftop lunch, and told her that I had just gotten off the water, and we had been beset by tides, strong waves and had kayaked for about 8 hours to cover just 27 kms. She heard it all and then said – Ok, now listen, I have made chicken Dilbahar and there are chapattis. You better come home and have it.