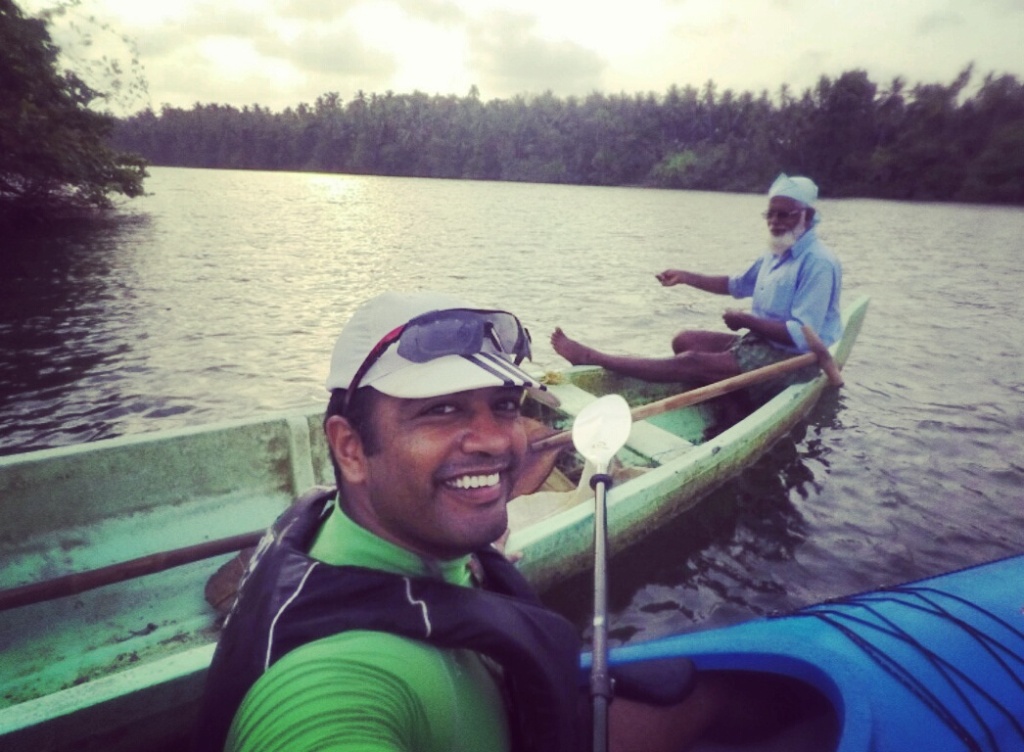 It’s 10:30 pm. And we are on a wooden  porch overlooking a river that gently snakes along in the moonlight. On my phone the flashlight is on. Kaushiq has another one. In the darkness a yellow beacon comes on. And then off again. A mammoth vessel starts moving ominously towards us. The silhouette betrays something sleek and fast. And silence.

The coast guard vessel becomes visible only within 10 meters. And it is a beauty. On board the friendly policemen only call out when they’re secured to the fishing boat off of our porch. Kaushiq walks off the porch and down to greet them. You can hear the light hearted laughter and visualize some hand shakes. Having emboldened them with a bottle of the right stuff, we wave them off. A long night of patrolling the river awaits them. We return to wind down our own party.

Landed in Kerala yesterday with Gaurav Prabhu. Had a hilarious time on the plane. 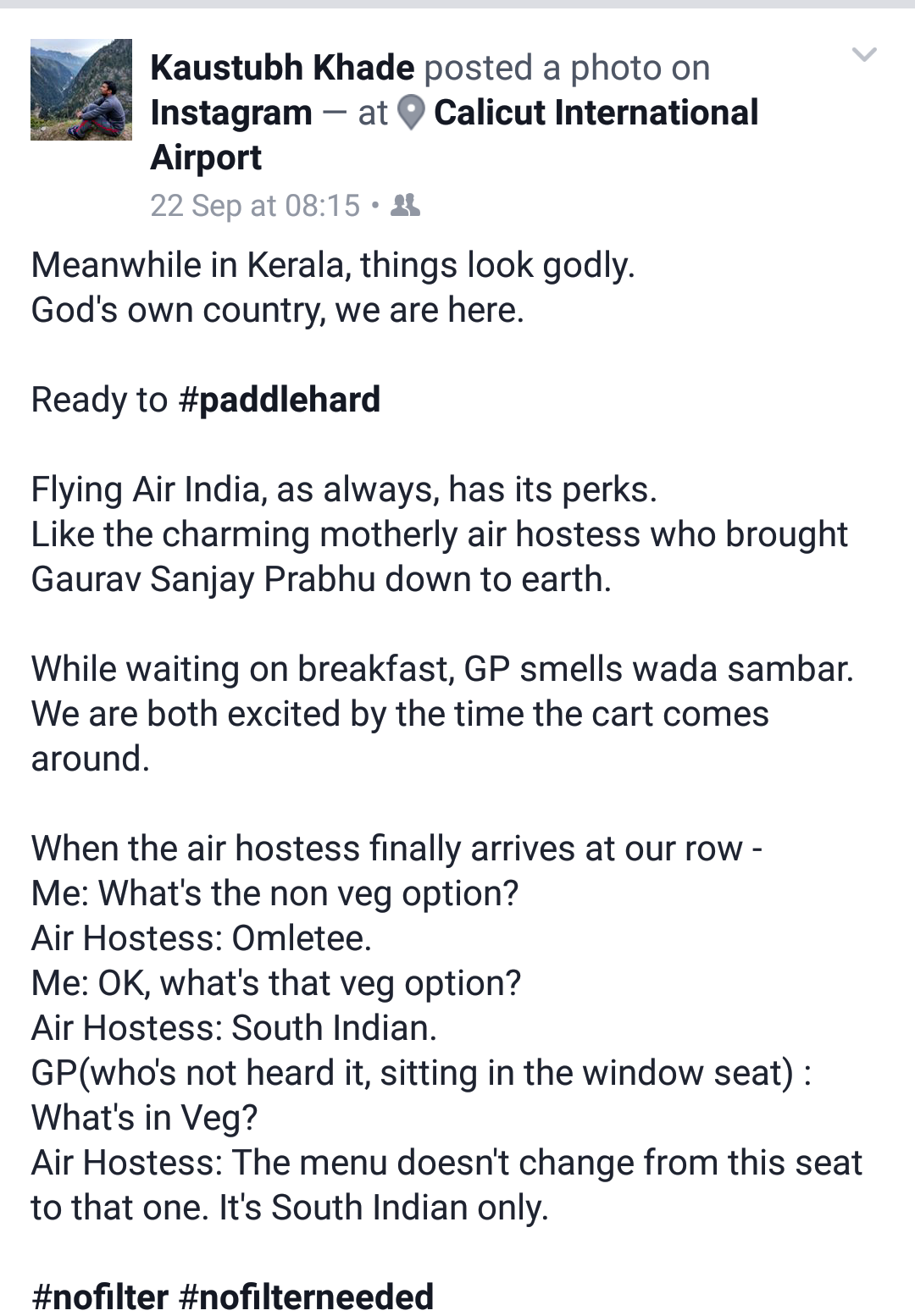 Went straight to Jellyfish, still surprising ourselves at having woken up at 4:30, and making it here by 9:30. As always, it didn’t disappoint. The morning was open to taking a nap and walking down to the local parotha place. Chicken curry for breakfast and a bridge over a river for a view.

Gaurav Prabhu or JP(starbucks) and I took a walk off the trodden path, and found a fishing boat tied in the water. Climbed in and take in the noise of the bridge overhead with its BJP flags fluttering. Out here, we are inconspicuous in the open. Joys of kayaking. You’re in the middle of it all, but you can choose to escape it all.

By  afternoon we are back at the club and Kaushiq has joined us. He brings out a fun toy he’s been hiding for a year. A topper sailing boat. We have our afternoon project. Rigging it up is fun ‘cos a bunch of lines are worn out and we’re using a nylon rope for the main sheet(rope).

An hour of running around and we are up. Three kayaks and a sail boat. It’s time to hit the water. Abhinash joins us later and all that’s left is the beauty of a backwater and river meeting. The water is green and the palms hang low. The afternoon has melted away and it’s a cool evening now. You round the island and the expanse of the Chaliyar hits you. Gaurav and Tarun are loving the freedom. Kaushiq is battling the shifty wind and we track back to catch him every now and then.

I guide Kaushiq across the river where the winds are better. And when we get a tad too close, I swap my kayak for the sail boat. It’s the first time in a topper, but it handles superbly. The wind picks up and I perch myself on port side and cruise.

That’s a first. Sailing up a river. And it’s a brilliant experience. A couple of maneuvers and I’ve got the boat in the quiet shade, gliding home. On the way back, some low hanging electrical wires scare the hell out of me. But it’s brilliant fun nonetheless. Turn the corner and we are parked.
And just as easy as that, a good day has ended at Chaliyar. Back at kaushiq’s house, we have an array of food. Fried fish, beef fry and chicken biryani. Throw in a singha and it’s the perfect way to wind down.

In the distance a coast guard boat keeps a vigil.

I woke up later than I intended to. The sun was way past that time that we ignore each other’s existences.

I turned and I felt my back throb. I reflected on last evening and decided a prolonged evening out is not for me anymore.

I felt the laziness kick in, and just as I was about to spur myself to leave it in bed, dad yells out – “Mom’s made methi for you. You better have lunch and go.”

Foiled. By mom’s marvelous methi. We can take a moment to reflect on how beautiful a thing it is. When I make my big debut on Masterchef, I’ll make a methi so fine, people won’t need desert. And then I’ll shrug it off and say “You should try my mom’s.” (End of digression.)

I’d luckily purchased and packed a host of healthy food and groceries for Mandwa. And after a nice sumptuous methi lunch, I set off on that 3 hour journey to training. In the attempt to get there, I take a rick to Vikhroli, a train down to CST, a bus to Gateway(Why, because buses are cool) and a ferry to Mandwa. In the middle of all this, I manage to make time for a pack of popcorn freshly made, and a medium glass of sugarcane juice from Gupta’s (that most awesome of sugarcane juicers). In my ‘oh-can-we-just-get-there’ morning melee, I hadn’t accounted for the punctuality of our ferry men, and I had to grumpily acknowledge the growing heat of a Bombay afternoon. (Safe to say, despite the Starks and ravens from the citadel, summer is coming)

The ferry ride was mostly uneventful, apart from a couple that were conspicuously dressed to match, in their white shirts and black trousers and black shoes. I wouldn’t have paid too much attention if not for the copious amounts of chips they were so eager on tossing to the passing gulls. One can only imagine a more health conscious seagull taking much issue with our penguin draped friends. In a fit of rage, I can picture him / her hovering precariously close to penguin man’s face and saying – “I say old chap, I do hope you’re feeding your children better than that.” Flap, flap, flap.

Seeing as how this didn’t really happy and these hapless gulls lapped up all the Balaji wafers offered up to them, I felt it was time to get down to the task at hand. Offloading my supplies I trudged down to the club house. A chance encounter with Randhir Behl was a welcome break to my otherwise slow day and after exchanging notes on our plans for the remainder of the weekend, I got down to changing into gear.

I must, at this point, remind you about the state of my muscles and the soreness it felt. I returned to trudging and picked my kayak from it’s housing. With a heavy foot, I pulled it down to the water. Did my stretches. A few muscles that had had the snooze button on, were rudely awakened. I took the kayak in, assembled my paddle. Eased into it, and gave it a few strokes. My Suunto didn’t kick in for the first 500 meters, and that’s when I felt it.

A rush of wind coming from just beyond the jetty. Smack on my port side. A wave splashed right along the side of the boat, and dragged me a good 5 metres wide. And just like that I was awake again. And I was paddling. Sometimes, all it needs is that first jolt.

I did roughly 8 kms of paddling, quite a bit into the wind. It was a quick sea and it let me know that I needed to have my wits about me. In the distance I could spot a bunch of sailors enjoying the wind. I could agree with them, if not for my rude awakening. I paddled till the sun had had enough of me, brought the kayak 100 metres off the beach, and did my capsize training. 10 successful reentries and a jug full of sea water later, I called it a day and hauled my kayak back to it’s home.

From Mandwa, on my 5th day, this is Kaustubh Khade, Paddling Hard.

I have to say that 2015 started off well. Apart from the obviousness of waking up on a cliff overlooking a beach hearing the waves come crashing down, there have been some great early decisions. For starters, I spent the last 4 days in Kolad learning safety techniques for capsize or very simply, rolling.

It’s been a tough few days and I can’t remember when my body was this sore, but the outcome has been good so far.

The idea came from Pradip Patade, a constant mentor and coach, and he put me in touch with Mahesh Sanap at Wilder West Adventures. You might know them if you’ve ever been rafting in Kolad or the Kundalika. They basically run the show there.

While the rafting is what I’d predominantly gone there for previously, they have a great property that serves as a place to learn river kayaking, take jetski’s out for a ride and learn your basic scuba too. The owner, Mahesh was extremely helpful and recognized the expedition and it’s adventurous nature right away.

Day 1: It was fraught with uncertainty and I was a little worked up with my resistance to being in the water. Despite having a good control over my breath underwater, I found myself panicked in the upside down scenario. I can’t say I drank anything less than 3 litres of river water that first day and frankly felt the expedition stood on the edge of a blade.

Day 2: I started with a new instructor. Rajesh, I’d say is a pro. He was doing things with his kayak that I couldn’t pull off on a dance floor*. I found my feet in the water and realized I’ve nothing to be afraid of here. Slowly, but steadily I was getting better at the stroke and pulled off some assisted rolls by the end of the day. My consumption of river water was remarkably less and I felt I’d seen the world upside down a lot more today.

Day 3: Rajesh was prompt in his instruction and we did some great drills. My confidence and morale was boosted by the friends who’d come down to join me kayaking on the water. (Needless to say they had a good time running around the lazy stream in the ideal afternoon conditions) I found myself bettering my guitar roll and by the end of the day, I could do my own rolls. Here’s a snippet from Day 3 –

*This analogy is misleading as I have two left feet on any dance floor. So here are some pics of what I’m talking about.

And I have a long list of things left to do. I’ve got the following things ticked off though –

In reflection – Sitting on the fence is great for the tan, but I don’t need it.