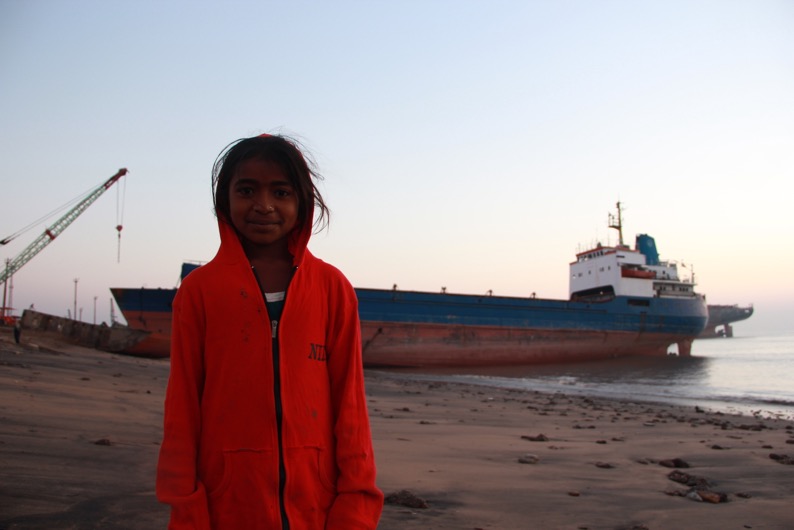 There is that old question – “If you knew where you would meet your demise, would you knowingly go there?” For 30 years, ships have been, like dogs sensing their end, retreating to Alang for their last rites. Huge giants of the sea tread softly in on a high tide, and as the water retreats their death toll is rung.

It takes 3 months to tear apart a medium size container vessel. Says the guard, Prajapati. Two minutes back he was scampering down the slopes of his perch in Plot no. 231. Now we take photos with me against the dead ship. “My brother lives in Bombay. I used to live in Borivali.’ He tells me that once a ship is brought into land, the captain is relieved of his ship. Sold through bids to any one of the multitude of ship breakers, it’s now no more than a hunk of metal, wood and plastic. And not a scrap goes waste.

As we drive into Alang, 5 kms out, they start. Big open warehouses. Fenced & categorized. We see rows of TVs, refrigerators. Big safes that could house pearls to be thrown into oceans in HD quality. Big dusty yards turned orange by life-rafts of all sizes and states of disrepair. One lot has engines in that rustproof green. Cables, pulleys, ropes of varying thicknesses & make. I ask for life jackets & the businessman starts blowing into airplane yellow inflatables. I can buy a bath tub with the works and a jerry can to fill it with, if the plumbing store isn’t open yet. Furniture stores share a border with warehouses selling wood planks that share a border with waterproof doors. Buoys, anchors & winter down-jackets. An army of table fans catching the dusty wind of this dying town.

‘UP, Bihar, Orissa, Maharashtra, Bengal se bhi aate hain.’ (Workers come from all these states. Even West Bengal) says Ramprakash, the kindly, groggy attendant at Ship Breaking Plot 134. ‘Dekh lo, par photo mat lena.’ Acetylene torches. What once took years of work, parts from around the world, and withstood the battering of a million waves, taken apart by a mob of migrant workers in a brown city in Gujarat. A 15 storey monster done in by a 2 storey white oxygen cyclinder. Nobody makes ships to fall apart, but in Alang you’ll find a cure for that.

Workers brushing their teeth, brown bucket in hand* enroute the banks of the sea that feeds them. Workers have been dying in Alang for a while now. Prajapati casually remarks – ‘Petrol chamber mein girte hain, kabhi fire lag jaati hain.’

Alang’s beach runs 5 kms long, each plot shares a wall with another. Walls & gates meant to keep prying eyes and camera lenses out. Not a single access way to the beach save the squatting squares*. Fate is not without irony as the one thing they all share in common are the words boldly painted on the wall – ‘Safety First.’ To drive home the humour – ‘Clean Sosiyo, Green Sosiyo.’

I’ve now wriggled my way on to the beach. The first ship I see looks a wreck. A container vessel who’s stern literally fell out with the rest of the ship. Containers stand in the water while an open ship rotor sticks out over the brown murky waves. I move on. The next ship looks almost whole. Only the top of the bow has been removed. Prajapati has seen it all. He adds nothing to his explanation of – ‘Permeeshan nahi aya.’ (Permissions were revoked / not given) As I stare at the hunk of metal that was removed before the paperwork came down heavy on this gigantic paperweight, I see the name of the vessel. Friends. So here it lies, dying and friendless. As I chat with said guard, two local women start picking up after the departing tide; plastic gems scattered on this rocky beach. Prajapati shoos them off. He finishes the sentence with how his hometown is just 3 kms away. Nothing is black and white here. Just various shades of brown, each squabbling for a juicier pound of flesh.

As the workers start entering the plots, I smell fumes. The kinds my lungs would avoid if they could take a walk off of this beach.  Big chemical carriers, container ships, dredgers, drillers. 50% of the world’s ships due for demolition come to Alang. On a long enough timeline the chances of a ship ending up at Alang is higher than ships in the Suez Canal being attacked by Somali Pirates on a bad day. Definitely more than the chances of the workers seeing a ripe age of 60. Welcome to Alang,the dying graveyard.