Catching Kayla : A brief into the life of Kayla Montgomery.

MS is a crippling disease with no cure. And makes you lose all feeling in your legs under physical exercise.

To be a long distance runner knowing it all, is nothing sort of spectacular.

Here’s to an amazing girl.

A lot of people ask me if it’s lonely out on the water paddling for hours.

No.
As the evening sun began to sink and I was into my 9th kilometre of the day. I looked up at my watch to see how far out I was.
Out of the corner of my exhausted eye I spotted the tell tale signs of something making its way back under.
And my evening was about to get infinitely better.

I made for the spot which my fellow mammal had so recently vacated, and stood still. I was rewarded as 1,2,3 dolphins made their way to the surface 30 metres from where I stood (or floated presently). And what a playful lot they were. The water was warm and, like self aware actors that enjoyed their craft, they loved the audience.

Sitting right between me and swiftly dimming light on the horizon, they rose and fell, ever so gracefully. And it was clear they weren’t coming up just for air. As the first came up, the second had his snout out and playful nuzzled him, pushing him out and over the side.
One can only imagine how playful they were under the water.

I sat the for a full three minutes lost to the spectacle. Then I kayaked back.  Knowing I was not alone on the water.

Raj Bhavan sits on the edge of Malabar hill and looks out on to marine drive. On a 3 km run I stand facing the whole of it, with a Mumbai Police buoy to give me company.

On Thursday, the 20th, after a long afternoon of training, I found myself at the house I’ve spent many a kayak session outside. (Albeit on the water.)

The Governor of Maharashtra, Ch. Vidyasagar Rao, was exceedingly polite and made allowance for the traffic in Bombay. Rushing in, the ADC gave us a sharp reprimand about the time, but the Governor didn’t bring it up even in passing. His only concern was his evening conversation he had to have with his daughter. Terribly humbling.

Our conversation took place overlooking Marine drive, with it’s soft yellow lights and the soothing sound of waves lending a tranquil setting to the evening.

I informed him of my kayaking, and my representing India at the Dragon Boat race in Thailand, 2012. I told him about the secular team we at the event, with people from Kasmir, Haryana, Chattisgarh, Madhya Pradesh, Kerala and how often our practice used to bring us far out enough to see his house. The boys had all been curious about it, and it was a point of discussion of many a training.

The hospitality offered was exquisite and extended well after our meeting. The PRO was prompt in giving us photographs as memories of the evening and lent a ear to my coming expedition.

Next step – try to get the governor on the water?

Seafarers know that there’s nothing more brutal than tempting the sea. I was advised to keep the mad ideas aside for 3 days and focus on what I might encounter at sea.

I signed up for NAMAC’s Personal Safety Techniques course that should in all likelihood keep my head above water. 3 days later, I’ve walked out with a good understanding of what to expect out there, and some quick insights on what to do if I come across the unexpected.

Me: So, sir, if I were to encounter a shark. What should I do?

Naval looking instructor: See. Shark is a fish. If it smells your blood, it will come. And it will suck your blood.

Naval looking instructor: See. It won’t bite you. It will suck your blood. And it will leave.

Needless to say, I called it a day after that. [Jaws.Twilight.]

The practical training was quite a bit of fun. And jumping from 4.5 metres into a pool and ferrying people using just the one hand makes for a highly successful day.

We had a good bit of fun over 3 days, and the chaps headed to the next level were a good crowd.

The most important things leading up to the expedition is training. As Pradip Patade, my kayak guru, has been saying – train, train, train. Be on the water.

Given the limited time, I’m experimenting with some different techniques. So I brought in an Altitude Mask to simulate a high altitude environment. I trust this will help me work on low oxygen and build on stamina. 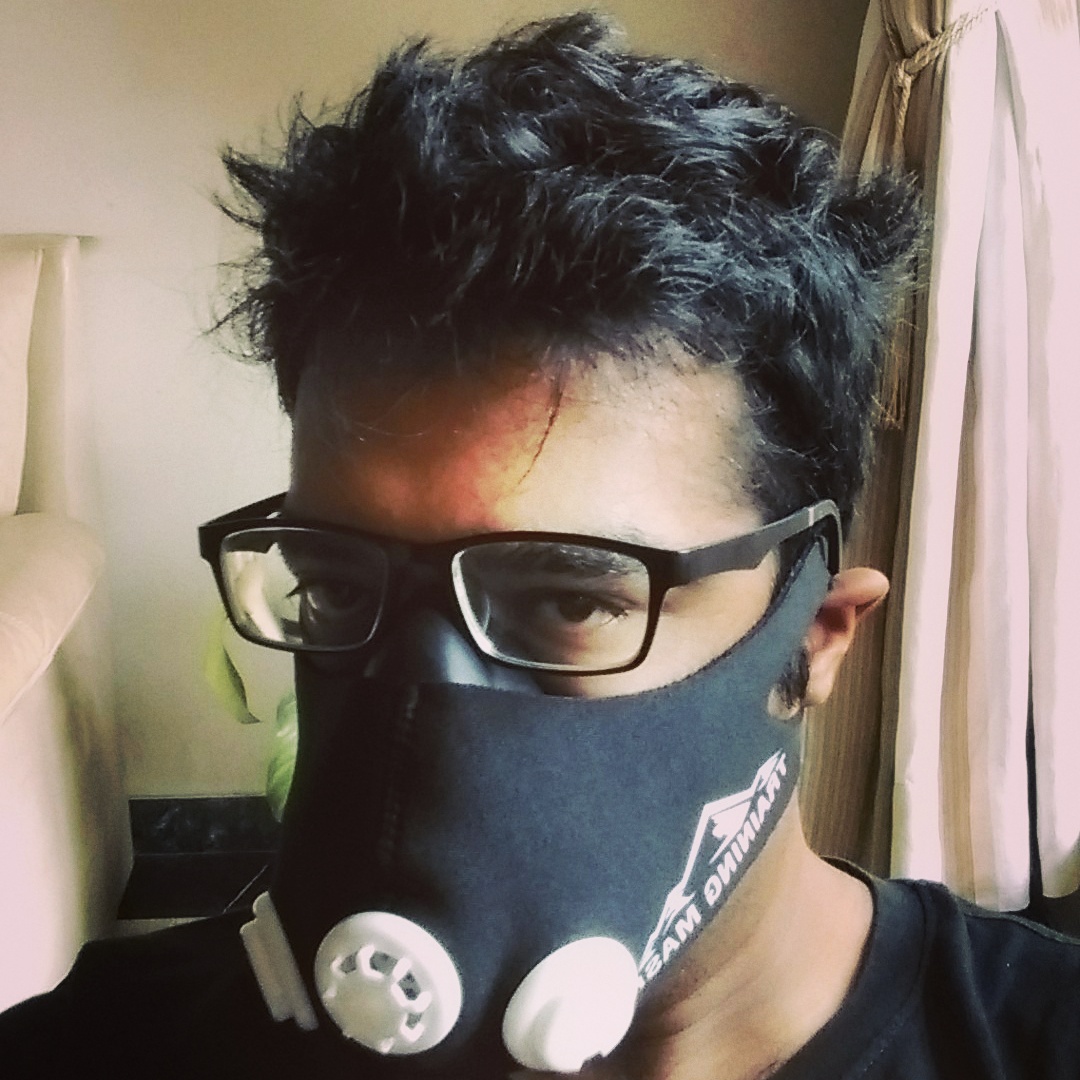 The reactions today were fun. The mask itself is rather fun to look at. And it wasn’t lost on the people at the gym today, who for better or for worse, gave me very confused looks.

Mumbai was overcast today. Lovely weather after the days of may heat.

Conditions were perfect to take a kayak out and I didn’t need a dry fit with the cloud cover. Slapped on a little sunscreen and after a quick warm up I was out with the wind behind me and the cool water rising over the sides of the kayak.
Heading out to the yacht was a breeze and I pushed it a little further to break the 2 km barrier. (I often do this to gauge my speed on runs to and fro) But you turn back to the shore and I could feel the strain on the arms and the wind hitting you square in the face.

I completed 3 trips. Covering a little more than 12 kms in an hour and a half.
It’s a steady beginning.

I wake up at 4:30 in the morning and rummage around for a phone who’s alarm never went off. I’m an hour early. I have a thin smile thinking that my subconscious didn’t want me to miss training today. I turn and get some sleep.

An hour later I’m up. I hit the scales while finding my spectacles. (I’m watching my weight a little cautiously)
A quick check on the messages and I weave my way to the kitchen.

My mom is, as always, shocked to see me. The frenzy she gets into when she realises that I might not get a full breakfast is simply cute. I get some milk ready for cereal. By the time I’m done with my wash, I have a bowl of cereal, fresh fruit, a packed box of nuts and a banana to-go on the table.

Mom is furtive though. Then she steps out and says – “kaustubh,  how much time do you have? I can make some cutlets.” When I shake my head, she asks when I’ll be back and what will happen to her cutlets.

Dad is usually up just in time to ask about my day. And what time I’ll be back. Having asked me to call it a night at 12, he ignores my limited rest, for now. Somehow they never fail to ask me to be careful. Today it was about the local train.

And so, I’m off to practice. My team sport. Knowing fully well I have the best team one could ask for.

And I have a long list of things left to do. I’ve got the following things ticked off though –

In reflection – Sitting on the fence is great for the tan, but I don’t need it.

Up until yesterday afternoon I had known madness in the form of Bear Grylls and Freya Hoffmeister. Sandy Robinson and our own Lt. Cdr. Abhilash Tomy.

Yesterday I met someone who has crossed the Pacific Ocean on a JetSki. He’s done a 18,000 km trip from Rome to New York on a 3m Jetski. To say that it’s madness is an understatement. To say that it’s being free is an even bigger one.

At the Royal Bombay Yacht Club, he gave a modest audience a 30 minute lecture on his expeditions, what motivates him and what the sea is to him. I spoke to him of my expedition and he was happy to meet me today morning.

I met him at 9:30 this morning, after navigating some good bit of office traffic. He was full of ideas and things to share. And from his wealth of experience, I gathered some important insights –

He’s promised to help out with any questions I may have. And I probably will have more.

But the important question that he answered yesterday itself – Sharks are like Pitbull. If you don’t give them a reason, they won’t bite you.

More on his exploits – www.pacificdiscoveryexpedition.com